I’M A MARRIED GUY, and have a son. He’s the greatest. Plus, I think my wife loves me. And that’s great. Nah; she really loves me and I love her. It’s amazing. I give her tons of credit for loving me. It ain’t easy, folks.

But I wasn’t always married. Before I got hitched, things looked pretty bleak for me ’cause it’s hard to find the right person.

The older you get, it’s nearly impossible finding the right person. By, ‘The Right Person,’ I mean someone who isn’t crazy. Someone you have commonalities with… like goals, dreams, and work ethic.

There are other kinds of people in the dating game too. People seeking someone who fits the perfect mold of the imaginary person they constructed in their head. They’re looking for an entity that matches a minimum, nineteen out of twenty criteria. These are the folks who get asked.
“Why are you still single?”
“I don’t know.”
“What kind of guy are you looking for?”
“Ummm… I don’t know; someone who makes more than $160,000 a year, and graduated from a reputable school with a Masters, or Doctorate degree? And owns his own home. Has an expensive car, and is at least six-feet-two-inches tall? And weighs less than 225 pounds; that kind of guy? I don’t know why I can’t find him.”

There’s a special place in Satan’s hole for people like this because when they finally meet the person who matches their ridiculous criteria, that person treats them like poop because they can.

But let’s be clear; there are women and men who think this way. It’s not a gender-specific trait. The world is filled with misguided guys looking for a non-confrontational lady, who has nice boobs, and perfect dimensions like thirty-two, twenty-four, thirty-six. Pretty hot, right? Plus she has a decent job. Is low maintenance. And doesn’t gossip with her girlfriends too much. And she wants to perform vile sex acts only with him, all the time. But when they’re together in public, she’s the perfect lady. Interesting, but very agreeable.

These are not the people I care about.

The people I care about are the one’s seeking someone who’s like them. Someone who’s not crazy. I know crazy isn’t the appropriate term. Maybe ‘short-sighted’ is better? But there are crazy people out there too. Avoid them.

All right. The scene is set.

PICTURE A SINGLE MAN WITH NO KIDS, driving a soccer mom’s minivan.

The man is me.

I bought the minivan because I DJ’d at weddings and small bars, and had a lot of DJ equipment. Speakers, amplifiers and stuff. Hundreds of pounds worth of gear. The minivan made it easy to transport. After awhile I stopped DJ’ing. But I kept the van because it was paid for. I figured… it’s not a good idea to give up a perfectly good vehicle just because it makes me look like a deadbeat Dad, is it?

In hindsight, it would’ve been a good idea. But back then, I didn’t know, so I kept it.

I had a specific fear with my minivan though.

At the time, I wasn’t meeting quality ladies. I blamed that on the fact I drove the van. I kept that vehicle looking sharp too. Washed it all the time. Vacuumed the interior once a week. Did everything I could to ensure this van didn’t block me from meeting the ladies, because absolutely… I was hunting for the right lady.

I LIVED IN HOUSTON, TEXAS when I met her. She was a little taller than me ’cause I’m a bit short, but she was cute. Nice body and pretty face. Plus the simple fact she agreed to go out with me, made her preferably attainable. My options were that limited. If you’re a single thirty-something-year-old-dude… I’m preaching to the choir.

Anyhoo, I forgot her name. We’ll call her Michelle. We talked on the phone, but hadn’t met in person when she asked me.
“What kind of car do you drive?”
“This is gonna sound weird, but I drive a minivan.”
“I thought you said, you don’t have kids.”
“I don’t.”
“Why do you drive a minivan?”

Then I told her the DJ story.

I think she thought I was kidding. But I wasn’t sure which part she didn’t believe… the part where I said, ‘I don’t have kids,’ or where I said, ‘I drive a minivan.’ Upon ending the call, I thought to myself… what kind of non-married dude would lie and say he drives a minivan? I’m pretty sure the ‘I drive a minivan line’ doesn’t get the ladies flowing through the sliding door, does it? I’ve never witnessed women salivating beside the parade of dudes who drive minivans. Doesn’t happen.

But… I’ve been wrong before; maybe there’s a secret society of women turned on by childless men who drive minivans? Here’s the thing though… people hunt for Bigfoot and manage to snap grainy photos of his fugly face. You can’t see much of it, but he’s hideous. In spite of that, I can’t even draw a picture of a lady who belongs to ‘The International Order Of Single Hot Women Who Are Secretly Attracted To Childless Men Driving Minivans.’ That’s how rare their sightings are; they don’t appear in my imagination.

MICHELLE CAME TO MY HOUSE and we met at the door. Afterward, we approached my minivan and she said.
“I ain’t riding in that.”

I’ll be honest with you; her words hurt because I just washed the damn thing. It looked good. Lemme paint the picture. It’s a snow white Dodge Caravan with jet black windows. Like midnight, man. Slick. Stock rims with plastic wheel covers. But they look almost like metal? And the hood is damaged from when I ran into the back of someone’s Ford F-150. He had one of those diamond plate bumpers, so… zero damage to his truck, but my hood folded like origami, not too much, just a little. But hard to miss. My van looked like a slightly damaged, Star Wars stormtrooper. The trooper who barely made it through training? But he still made it. He graduated. And she refused to get in?

I followed the direction of her arm, towards a pimped-out Chrysler 300. This thing was painted one of those custom colors where you can’t really tell what shade it is. Like depending on your visual angle, it’s either blue-green, blue-black, or something? You seen cars like this? Not a color found in a box of crayons. Plus, it sat on twenty-two-inch-rims. Bright ones, like stars. Polished to death. Car was clean. Wicked sharp.

While I approached it, I glanced back at my ride and thought… no wonder she denied you, f****d up R2D2. Look at yourself!
Then I gazed at her mystery colored chariot-of-darkness… you can’t compete with this!

“Where are you going?” she said.

Michelle was behind me and I thought she asked, ‘Where are we going?” So I spoke over my shoulder. “Your car’s awesome. Where’d you get that paint job?”
“That’s not my car.”
“It’s not? Where’s yours?”
She chuckled. “Right here.”

Then I noticed the creature beside her.

IT DIDN’T HAVE a consistent color. I think at one point; it used to be black. But the black got sunburned and faded to a pale, gray-gristle? It had diseased patches of rust blanketing its roof and hood. And the doors didn’t close all the way. They dangled off its hinges from an accident or something? Plus, it didn’t sit level, it was leaning because it sat on one of those doughnut tires? You know that useless spare runt they put in cars? It had three regular wheels… and I use the word ‘regular,’ loosely here. They were bald as babies wrapped around rims. Plus, you got the jacked up spare barely holding on. As I approached it, I realized… it’s a Mercury Cougar.

But the Cougar got ran over by another car. Then the car backed up and ran over the Cougar again. Afterward, it drove forward. Did it again. Then did burnouts on the Cougar’s carcass and turned it to roadkill.

You can Google this; Ford Motor Company was the parent-owner of the Mercury vehicle brand. They never produced a vehicle called, Mercury Roadkill.

But that’s what she had, a Mercury Roadkill.

OF COURSE, I THOUGHT TO MYSELF… what the f**k is this? But I didn’t wanna be mean. Just because she talked crap about my car? Does that mean I should do the same to hers? Probably, yes. But I’m nice. That’s my weakness. I’m super nice to people. I need to be mean.

Anyway… when she opened her door, it creaked loud, like <CREAK>. Then I opened mine and it did the same thing <CREAK>. It’s like the doors were talking to me. The first one said. ‘Stay out.’  The second one said, ‘Just kill me, dude.’

After I sat, I gazed at the interior. Ripped seat covers. Faded as hell. Cracked dashboard, peeling from overexposure to the sun. I turned around and the back seat was covered with clothes. Was about to go to the laundromat, but didn’t have a laundry basket? So instead… just farted the full load of clothes back there? There were ten pairs of shoes, strewn across the floor. Pumps. Flats. Sneakers. What are they for?

I glanced up, and the ceiling was hanging. Have you seen this? Where the fabric droops around your head? It was riddled with staples, attaching portions of it to the interior roof. I raised my brow and thought… ugh, this is ghetto.

When I turned forward, I smelled something. Like mold? It was powerful. Musta been brewing for a while, so I asked her.
“What’s that smell?”
“My car got stuck in the flood from Hurricane Ike. It was ruined. Totally submerged. After it dried, my dad helped me clean it. Then we got it running again.”

What could I say to that? Hurricane Ike was a severe storm in Houston at the time. Caused billions of dollars worth of damage. People died. It was a big deal.

“At least you were able to salvage it,” I said.

HERE’S WHAT I REALLY THOUGHT… what’s wrong with this woman? I have a perfectly average, storm-trooper-ish minivan we could ride in. My car doesn’t smell like moldy mops. It smells, well; it smells normal. There’s no smell. Plus, the outside doesn’t look like it got bombed in Operation Desert Storm; it’s fine. And my van isn’t lopsided; it’s got good-legs. But she wants to ride in the roadkill. There’s something fracked about this woman. No joke.

WHEN I MEET SOMEONE for the first time, I start their qualitative rating at one-hundred-percent. Everyone starts at a-hundred because it’s the right thing to do. I don’t care what you look like. You’re all one-hundred-percent wonderful people in the beginning. The lovely Michelle was at a hundred too.

But after the, ‘I ain’t getting in your minivan’ thing. And the ‘Let’s ride in my shit-mobile’ deal; I thought to myself… this chick’s a broken-basket. She’s psycho. Major red flags, folks. I just met her, and Michelle plummeted from one-hundred-percent, all the way down to forty, maybe thirty? Once you lose points, they’re gone forever. They don’t come back.

And this woman Michelle, was into some weird stuff. Oh, my God. I could tell you sad stories about what she asked me to do to her.

But, no. We’re not ready for those discussions yet.

Anyway, after Michelle departed from my life, I imagined a theory that explains the entire situation. The set of conditions single people in their thirties and forties deal with in the dating game; it’s called ‘The Dodgeball Theory.’

It takes time to explain. 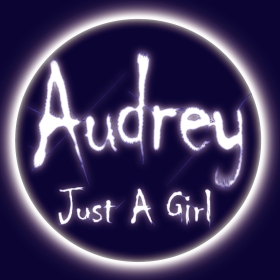 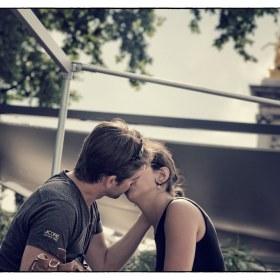 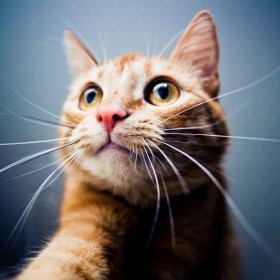 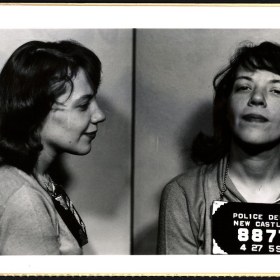